With me being a Lolita with more of an Old School taste, there are a lot of items that I covet, mostly because of their rarity due to how long ago they were released. So, my wishlist is a long one. But the item I will always place on top of my list is any sort of bag from Patchy.

If you've been through my blog before, you may remember me finally getting one of these bags last year and talking about it in this post here. But getting that bag didn't satisfy me. And ultimately, purchasing it lead me down the path of obsessively trying to get even more Patchy bags. Sadly, I wasn't able to get another one since my first. That is, until now. Yes, after about a year, I was able to find and purchase another bag from Patchy. The best part is that it was one that I thought I would never end up owning.

This three-way (handbag, shoulder bag and backpack) Patchy bag popped up on Yahoo! Japan auction a few weeks ago with a staggering opening price of 1600 yen. With the price set so high, I thought it would be best to forgo it, especially when I could get a number of different items for that amount of money. But no matter how hard I tried, I couldn't stop thinking about the possibility of owning the bag and how good it would feel knowing I owned such a piece. In the end, I caved and bought it. And thankfully, I was the only one who put a bid on it, probably because no one else in their right mind would pay that much for this bag. With the fees included, I ended up paying $150.

If someone would have told me that in the future I would have purchased a $150 bag I would have laughed in their face. And yet, here I am- $150 gone form my bank account and nothing but a bat bag to show for it. Don't get me wrong, I don't regret buying it, but it does shed some light on my spending habits. And because of it, I'm restricting myself from anymore impulsive buying for awhile. I'm trying not to let it get me down, though. Every time regret tries to creep up on me, I just think about how much my coolness will increase whenever I wear it!

So I guess I got my number one goal item in the end. This week's topic for Lolita Blog Carnival turned out being really convenient for me! 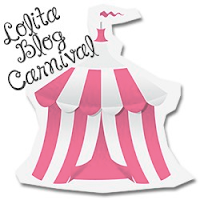 If you want to see what kind of items other's have been hunting for, take a look at these other Lolita blogs:
The Bloody Tea Party

Along with this three-way Patchy bag, I also was able to get a Patchy change purse for about $5. It's very safe to say that I'm obsessed with this brand's bags and accessories.

I don't know if the change purse the same one in this advertisement, just without the ring at the opening, but I'm sure that it's supposed to be worn the same way. 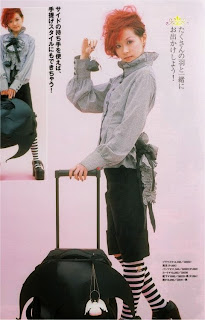 I really like Patchy's bat items, but in the future, I hope to get at least one of their pieces with their angel design, like the one hooked on the suite case in the picture above.

crypt_kasper
I'm a Gothic Lolita who has a strong liking for Old School Lolita fashion. Currently, I'm busy collecting anything that has bat wings or in the shape of a coffin.