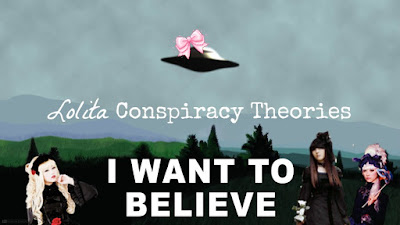 Last year, I had a bit of fun talking about Lolita conspiracies theories with my friends. But then... some of them... no matter how bizarre, started to make sense. *dramatic music playing in the background* This lead me to the idea of making a Lolita conspiracies theories series for my main blog. The first one up for discussion is where Ero Lolita got some of its looks from.

DISCLAIMER: This is solely for fun. And although there will be examples and some sources provided, this is still just a speculative hypothesis.

So, where did I this get this absurd idea from? Well, it all began with a crown I'm customizing for an upcoming Ero coordinate I planning. And if you didn't know, crowns, specifically mini crowns (or tiaras), were a trend in Ero Lolita (and in Hime Lolita too, but that's something completely different). 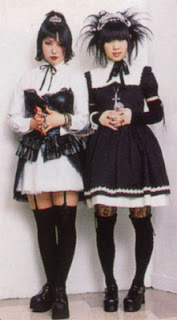 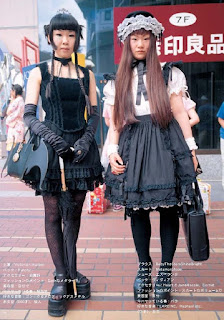 I bet you're like, "What? What does this guy have to do with any of this?" Well, here's why:

The year was 1999, and a certain visual kei band started making waves in the music industry with their major debut album, Gauze. This band was Dir en grey, and with all of this new found attention came a hefty amount of music videos being released, even for songs that weren't singles. One of those songs to garner enough attention for its own music video was "Rasion Detre." This video would go on to produce some of the band  members' most iconic looks, with Toshiya's "Ero" look being one of them.

To give some insight on the themes used to produce this stage costume for Toshiya, here is Dir en grey's music video for "Rasion Detre" (Blogger wouldn't let me link the video directly on this post for what ever reason). But before that, some WARNINGS!! This material is NSFW and potentially triggering. There's nudity, bondage, and self-harm (eye gouging) presented in this video. If that's too much for you, skip it (don't put yourself through that). If you just want to listen to the song's audio, you can listen here.

Now, I bet you're like, "Um, okay. This guy had a crown on his head, so what?" Well, this is huge because Gauze came out on July 28, 1999, but Dir en grey were already releasing singles as early as January of 1999 (source). "Raison Detre" wasn't a single, so it's harder to get documentation on what day the video was released, but, based on other information, the video had to have been released anywhere from mid 1999 to the time of the first single of their second studio album, which was Myaku in February 2000 (source).

But what does this all mean? *dramatic pause* This means that the first time anyone incorporated crowns with Ero may have been done as early as 1999 and done by a visual kei artist no less! I mean, think about it. Were there any Lolita brands, or Gothic brands for that matter, doing Ero at the time, and were they sticking crowns on their heads if there were? Moi-meme-Moitie also came out in 1999 (does any one know the exact date), and provided some pieces suitable for Ero Lolita, but have you ever seen one of their official brand coordinates styled with a crown? No, right?

I had always came to think of the crown trend being completely "street" driven, meaning that it was something that formed from street fashion and not much from a fashion designer for a major fashion brand. And with mini crowns mainly only being seen in street snaps at this time, this seems to be true. But why is that so important? I think knowing that the crown incorporation with Ero being a trend picked up from street fashion is key to understanding how this combination was created. And the key lies with this next picture.


Do you remember a time when you would look up Ero Lolita and this was one of the first pictures to pop up? For those who didn't know, they probably would just nod and say "Yup, that's Ero," but for us visual kei and Dir en grey fans, we all knew that this was a cosplay of Toshiya's costume in "Raison Detere." Also, take in consideration where the picture was taken. It's location is none other than Harajuku bridge.


Again, unless you were in this fashions for awhile, the Harajuku bridge may mean nothing to you. But the Harajuku bridge was a mecca for people in unique fashions and cosplayers (especially ones for visual kei) alike. It was the best spot to dress up in your best outfit, hangout with friends and wait for your picture to be taken. But above all, it was a place where Japanese youth could feel comfortable with their individuality and have a safe space to express their creativity through fashion. And with this platform, fashions and trends were not only able to evolve, but also mix with each other. Therefore, to say that there may have been an overlap between visual kei and Lolita because of their fans being so close to each other wouldn't be a far stretch. Don't forget about the Lolitas who were also visual kei fans too!

But why crowns? Why are they so special? Well, they aren't. Like I said at the beginning of this, there's nothing specifically Ero or Lolita about them. This is why I think this had to have came from a visual kei artist, because it's just a frivolous addition! I think the stylist who styled Toshiya just put the crown on his head because it looked cute, nothing more. Having "characters" was popular among visual kei bands at the time, and Toshiya's "character" was one that was more playful, youthful and feminine. What's a better way to make a man look youthful and feminine than to put his hair up into a ringlet ponytail, put him a outfit that gives him the apperance of having breast and tossing a crown on him?

So, you read through all of this and I bet you're like "Well, okay. Crowns, sure. But what about that other stuff in Ero Lolita?" Well, lets look at some elements that lends itself to Ero Lolita's look. When I think of Ero Lolita, I usually think of:
Basically, things that may have an erotic connotation to them. This sounds about right? Well, what if I told you that visual kei bands were already dressing like this well into the '90s? Visual kei bands were already on that bondage and fetish gear train and was riding it all the way into the 2000s. Seeing that there's proof of fans wanting to recreate these types of outfits from numerous pictures of visual kei cosplays at Hararjuku bridge, I think it's fair to assume that with visual kei's growth in popularity in pop culture, that fashion brands began to emulate these trends too. Since I've already dedicated most of this post to Toshiya, lets just stick with Dir en grey for the next example.

You're looking at this and I bet you're like "What the heck is this mess? None of this is remotely Lolita or visually appealing." Well, keep your eyes on Toshiya (he's the one on the left). What is he wearing? It looks like a dress with a PVC bodice with buckles (or maybe corset lacing) going down the front with a tulle skirt or something. And is that a collar? I'll admit, this is a bit messy and no one should be labeling this outfit as Lolita. But do you think it has the proper elements to make a good Ero Lolita outfit? Still, no?

Right about now I can imagine you thinking "Well... that's Metamorphose. I mean, they always make weird things. Am I right? *forced laugh* Just because Metamorphose makes something doesn't mean it's for Lolitas. Remember that mechanic jumper? Yeah, remember that?!" Your right. Metamorphose has made some strange choices with the things they put out. But look at the JSK again. This time... *dramatic music playing in the background*... with a blouse underneath and a headdress!

Too much of a coincidence, don't you think?

crypt_kasper
I'm a Gothic Lolita who has a strong liking for Old School Lolita fashion. Currently, I'm busy collecting anything that has bat wings or in the shape of a coffin.